As we get into editing images/composing images, let’s discuss a bit about the ethical side of PhotoShop. After reading this week’s online articles on this topic, answer:

Photo manipulation, a.k.a. Photoshop-ing, has troubled and in some instances scared me over the years, in large part because of my education and original passion for newspaper reporting and editing. The courses I took in high school and eventually college were heavy on the ethics of maintaining not just the spirit of a photograph, but the original moment captured. My specialization in newspaper layout and design carried much of this ethical burden in theory as editors were usually the last eyes for the paper before going to press.

Similar to the readings, I was ingrained to only make changes/edits that in no way modified or adjusted the original photo beyond what was captured on film (yeah, I used 35 mm), but compositing was definitely a no-no, and so was adding or removing any elements. My courses included historical examples, that were colorfully shared by my English lit teacher who attended Kent State during the civil rights movement and how simple changes to photos, while seeming innocuous, had an impact on trust in both the government and the media. 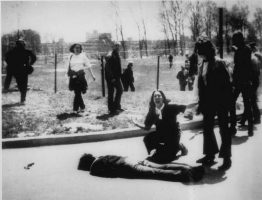 However, as noted in the readings, the perceptions by the consumer digesting the visual information from news and other printed/online publications has changed. A Dutch college student as recently as this month tricked her friends and family on social media into thinking she’d taken a 5-week southeast Asia vacation, when in fact, she’d only traveled as far as her computer keyboard and photo editing software.

Additionally, the perceptions by brands have also evolved. I, too, have had to change and in some instances “embrace” the trade of image manipulation and compositing to convey an idea or experience.

At my company, one of the main points of difference in the industry is the authentic, real-life, non-fantasy or non-imaginative experiences. SeaWorld Parks & Entertainment is grounded in reality from the interactions guests have with the animals, both up close and in the shows and exhibits.

This can pose a challenge visually, especially when launching a new attraction or experience. In many instances, the marketing efforts begin before ground is broken. For many projects, it becomes necessary to take creative liberties with the key visual execution, but leadership is consistently reinforcing the question, and thereby the direction of, “can a guest actually do this?”

When marketing the newest ride, Antarctica: Empire of the Penguin, shortly after unveiling the ride vehicle, new concept art and renderings were released, led by an updated key visual of the ride car among penguins.

The creative direction was focused on:

Here was the final version (albeit cropped to be squared-off)

For months, news media, resellers, even the website I created, featured this image. However, no one had actually seen the ride experience because it didn’t actually exist. At the time the composite was released, the ride was still in major construction with only the walls in place.

When the ride did open to the public, and it wasn’t as “thrilling” as expected, and guests weren’t riding directly next to penguins as illustrated, nor were they walking side-by-side with the birds, several media outlets took notice. For the brand – true, authentic, real – it was a bit of explanation as to how this composite rendering (which had always been titled as such) could (mis-)lead to a very different guest experience.

All in all, leadership learned and reinforced the need and value to create real-life images and visuals. In the year that’s passed, many campaigns have launched which have further focused on the “authentic” and “natural” at the core of the imagery. Regardless of your perceptions of SeaWorld Entertainment, its understood that the point of difference must not only resonate, but be as clear as possible to the guest; up-close animal experiences.

Does this mean photographs aren’t adjusted or edited? On the contrary, not a single photo/visual released isn’t modified in some way; make the water more blue, the glare from the glass removed, or the guest adjusted to be closer in frame with the animal. However, the main filter for the brand has, and continues to be, “can a guest actually experience this on an average day?” If the answer is no, then the photo isn’t used or an alternate is selected. The brand requires this to maintain itself, and as such, filters all creative executions in both still and video/digital executions.

Overall, it’s my belief that imagery should in all executions be a visual extension of a company or individual’s brand. If it’s in any way misleading or not true to the brand’s essence and recipients’ perceptions of the brand, then ultimately it will do more harm than good.