This assignment is focused on playing with layer styles, typography and creating a laid out graphic. I will show you an example of this assignment in class on Tuesday.

If you’d like to use chalk-like fonts, free fonts can be downloaded at: http://www.fontspace.com/category/chalk  or dafont.com.

You are the graphic designer for a local coffee house. Not a Starbucks-style, but a shoppe similar to Central Perk on Friends. Design a chalkboard-style graphic that promotes the shoppe. They will be using this image as a graphic on their website. You could focus on specials, you could focus on entertainment, anything you’d like. I will be looking for the following: 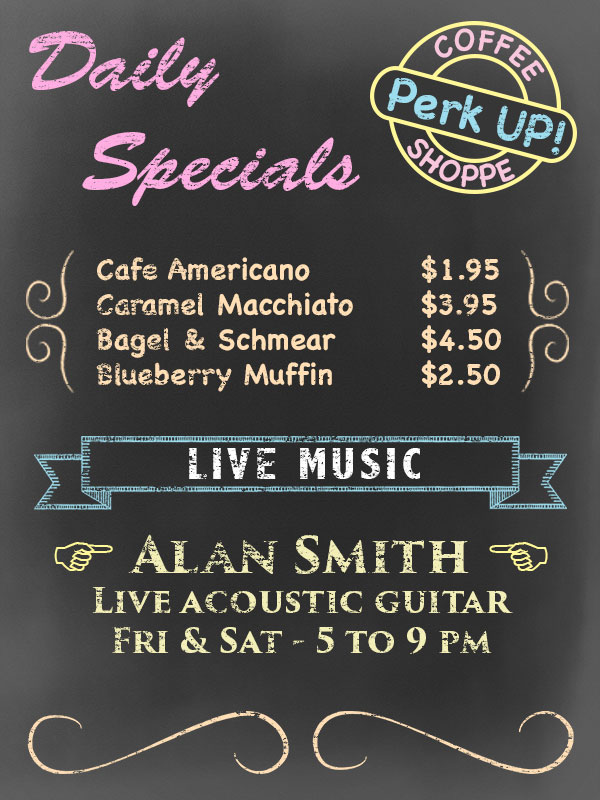 For this week’s design assignment, I first installed the chalk styles as instructed in class. Next, I installed several fonts I had found online that were characterized as “chalk” in design.

To create my design, I opened a new file with the size required of 600 by 800 pixels. Next, I placed my selected background from the images provided.

I decided first to build the logo. I started by drawing my outer circle, then duplicated and reduced the size of the second circle using the Shift + Alt/Option to scale. I then applied text to the outside of the inner circle at the top, and to the inside of the outer circle at the bottom. It was necessary to duplicate the circles as I didn’t want the text to be directly on the circle once I applied a yellow stroke. I then drew a rounded square box with a radius of 20 pixels and filled with a similar grey as the background selected. I placed a final text layer on top of all with the name of the coffee shop, “Perk UP!” I colored the words “COFFEE” and “SHOPPE” with a light pink and colored the store name with a light blue and applied style 14 from the chalk styles provided with the assignment. I adjusted the tracking in the space between “Perk” and “UP!” to tighten up. The font selection for all three is Chalkboard Bold. I placed all the layers into a group, titled “logo”, moved to group to the upper right corner, transformed/resized to be slightly smaller, and did a free rotation to make the logo look more like a seal on the chalkboard.

Next, I build the headline using Brush Script Std Medium with the bright pink chalk style 16 provided. I added two spaces before “Specials” and increased the leading between the two lines of text. This was placed as my top layer for the assignment.

To create the specials section, I drew a text box and typed my specials. Next, I chose the font Chalkboard SE Bold and applied chalk style 15. To frame the specials, I placed an ornament from the files provided, erased half the graphic, applied chalk style 15, duplicated the layer, and finally flipped horizontally. To finish the lock-up, I moved these to the outside of the specials text and grouped them into their own folder in layers titled “specials” after centering and aligning.

For the “LIVE MUSIC” section, I placed a new ornament in the shape of a banner and transformed by resizing to make smaller. I centered the ornament with the background and applied chalk style 5. I then drew a text box within the banner and entered the text “LIVE MUSIC,” centered in the font Abadi MT Condensed Extra Bold Regular. I applied chalk style 1 and then increased the tracking to space out the letters. I then drew a text box, selected the font “Wingdings” and typed a capital letter “F,” resized to make larger and applied a light yellow color. I duplicated the layer and then flipped horizontally. These were placed around the next text box. For talent information, I created the text box for the artist, “Alan Smith” which uses the font Trajan Pro 3 Bold. I centered the text and made the second and third lines of featured days of the week and times in a smaller point size. I then applied chalk style 14. This text box was aligned with the two wingding text boxes and the “LIVE MUSIC” banner above it. All these layers were placed into a layers folder titled “live music banner.”

Rounding out the design, I placed a scroll ornament, applied chalk style 15, duplicated the layer, flipped horizontally and then aligned the two at the bottom of the page. These were also placed into their own layers folder titled “bottom scrolls.”

To complete the assignment, I saved for web as a jpeg at high resolution.

Admittedly, I had a lot of fun with this assignment, levering some of the logo design work I learned from a previous courses (albeit in Adobe Photoshop this time instead of Adobe Illustrator or InDesign). I did struggle with the chalk styles as some of them felt grainier or too large for the individual executions. Overall, the feeling is sophisticated urban hipster and I’d like to think I would see this work in a coffee shop in a busy city or metropolis.