This week, you are designing a banner ad series for a brand of your choice. You are tasked with preparing a first quarter (2015) banner ad campaign for them so consider the time of year when it comes to your campaign.

Submit one (1) .PSD file with your banners organized into their own folders and labeled accordingly. (You should have at least 5 distinct folders). I want the layered files in these folders, not flat banners for the PSD submission.

For this week’s Design Showcase assignment, we were asked to create a digital advertising campaign that would launch in early 2015 for a specific brand. From my previous retail experience, I decided to select Target discount shopper as my company, and what’s somewhat of a standard post-Christmas retail season of “dollar days” to create my digital advertising. The campaign would be simple; “Dollar Days @ Target” in keeping with the best practice similar to out-of-home (OOH) advertising of three to five words for a headline. It would be for online shoppers through Target.com. 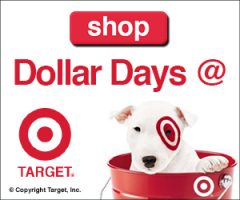 I started my project working with the 300 by 250 pixel ad size. Additionally, I created the Target logo in Adobe Illustrator and then brought the logo into Photoshop as a separate file to reference/import as I created the different ad dimensions.

Working with a white background, I duplicated the Target logo and also added a headline in the same font, Helvetica Bold, with modified tracking and leading. Initially, I started my headline/font color using a money green color, given the nature of the retail season. However, because of the red associated with the Target brand, the effect was more Christmas than I cared for, so I changed the text color to match the Target red color.

Next, I searched for various “Target dog” images that I thought would work with the campaign. I found one that featured the iconic black and white dog as a puppy, with the red Target symbol over his left eye, sitting in a red bucket with the Target symbol in reverse. After applying this photo to my file, I adjusted spacing and alignment and added in a copyright for the company.

I then worked on building out the rest of the campaign for the other three sizes of digital ads, including 160 by 600 pixels, 728 by 90 pixels, and 320 by 75 pixels. The only struggle I encountered was having to adjust the logo and how the words stacked. Admittedly, I’ve done some creative direction in my current job for digital advertising, so the size constraints and image requirements were including in my thought process from the original selection of my company, to my campaign, through to my final creative execution. I think the most challenging part might have been sourcing imagery and isolating the Target color and font.

I created a “Shop” button with the same Target red, adding a slight drop shadow and bevel & emboss. I placed this button into the layout of the three larger ad sizes, excluding the 320 by 75 version.

To complete the creative, I added a .5 pixel frame to all the ads to help them be framed within the ad serving networks through which they would display. I saved all four sizes as .jpg files (seen in this post on the right).

I selected my skyscraper, or 160 by 600 pixel ad, to create my animated gif ad. I decided on four slides in total that would animate, and toggled on/off the layers to create the four separate .gif files. Using the instructions from class, I created a stacked .psd from the four slides, reordered my layers, and created an animated frame. I did have to complete a final step this time, as each image wasn’t a separate thumbnail in my timeline. However, I was able to adjust the transition so that each image started after the subsequent slide. I chose a final .5 seconds for the first three slides, one second for the final completed slide, and a total play of 3 times. I saved for web this file as an animated gif, and it’s the last image on the right of this post.

Finally, for the .psd submission portion of the assignment, I took each of my original four .psd files, ordered, renamed, and grouped the layers together, and then duplicated into one file.

This was a fun project and I’d be interested in learning more about how to create even more animated effects and transitions for advertising.

Disclaimer: this post and associated images/creative are purely for educational purposes only and not intended for any commercial use. I am in no way affiliated with Target Brands, Inc.