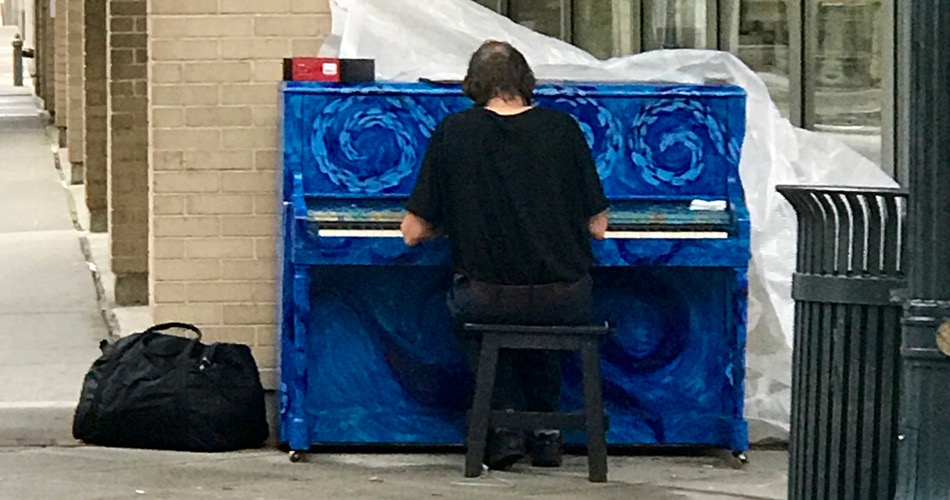 Georgia On My Mind

In 2016, I’ve stepped up my game for weekend travels having already completed three out-of-town trips (Okeechobee, Florida Keys, Chicago) and decided to take travel to the next level.

What I’ve affectionately tagged #3in30, I’m taking a few fun trips in one month’s time. The first was to the southern city of Atlanta to attend Music Midtown 2016.

I stumbled on the annual music festival after researching tour dates for one of my favorite bands, The Lumineers, which nearly rounds out my current favorites. The Avett Brother and Old Crow Medicine Show in New Orleans last year started the desire to see my favorites live, and has continued with the Okeechobee Music Festival to see Mumford & Sons, The Avett Brothers again, X Ambassadors, and more. ATL checked a few more on the list.

Flying Frontier Airlines for the first time – as a roundtrip ticket was $56 – I arrived two hours late into the city because of a delay out of Orlando. I could tell several others on my flight were attending the same festival. Weather was good when we arrived and I grabbed my MARTA pass for the next three days, heading downtown to drop off my bags and explore the city.

As with many of my trips, I’d planned out much of the weekend, except these first few hours. There just wasn’t anything I wanted to see or do.

After leaving my backpack at the Bell Desk, I walked to Centennial Park thinking how it had been 20 years and two months since the 1996 Atlanta Summer Olympics. I wanted to play with my new iPhone 7 Plus, which I’d had for less than 24 hours. I snapped a few pictures and tried out the new cameras, which was my main reason for the upgrade.

My lunch plans for the day were set before I booked my flight; Taco Mac at the Phillip’s Arena. The wings are great and the local beer selection on point. It’s also a short walk from the park and connected to the CNN Center as part of the arena. I ended up running into some type of relay for a cause, of which I’m unsure, as there were thousands of individuals walking the streets.

The wings and Jekyll Brewing beer, recommended by my bartender, were great. I watched a bit of football before heading to the MARTA station. A guy on the train recognized my hat from the OMF and we chatted about that show and our planned highlights for this weekend. It wasn’t the last time I’d be complemented on either my hat or shirt for the weekend.

I arrived at the festival about 10 minutes before the first act, Zella Day, took the opening stage. I knew my highlights for the Saturday would include DNCE, Beck and Twenty One Pilots; all three of which DESTROYED their performances to packed crowds. Other artists/bands I enjoyed and also delivered fantastic shows were City of Colour, Chvrches, Lucius, Band of Horses (another favorite I was excited to see), and Mayer Hawthorne.

Sponsorships abounded at this festival, but my favorites were Citi which hosted a VIP lounge and a special main-stage viewing area and the Terrapin Beer garden. The three were regular stops for me.

I regrettably couldn’t last the entire night, given I’d been up since 3:30 a.m. After hearing “Heathens,” by Twenty One Pilots, I made my trek back to my hotel. My room was nice, and although the front desk was slow, I appreciated the proximity to downtown and the trains. Sleep was clearly on my mind after a quick shower and crawling into bed.

Sunday I got up and moving around 9 a.m. A quick breakfast search found a nearby Waffle House; a Georgia staple. The outlook for the weather, however, wasn’t as nice and I knew I’d be in for a wet one. But, I’m a true Floridian and acceptance of rain soakings is kind of a proof-positive to being called a true sunshine-state native. Yep, the irony.

While waiting for my check, I map out a path that will take me past a Starbucks on my way to the MARTA. I find the Starbucks closed for the day … odd … and circle around the building to a Dunkin’ Donuts I’d seen. I’m stopped in my tracks when I hear piano music. I look around and see a gentleman, I think to be homeless, playing a blue-painted piano. It’s one of the 29 placed through the city and metro area as part of Pianos for Peace. He couldn’t see me, but the music is beautiful in the misting rain. I record a short video and snap a few pictures.

As I trek out of DD I continue to hear him playing and think how one minor change to my five-minute plan resulted in experiencing this beautifully alive artwork. I loved the reminder that even the best laid, smallest plans can be derailed with amazing results.

I arrive at the festival grounds early and with hundreds of others waiting for the gates to open. At noon, we’re able to get in and I make my way to the main stage to see Joseph, a group of three sisters from Portland, Oregon, performing with just an acoustic guitar and a bass drum beat. They delivered a great how.

The day is going to be packed with artists, and artist conflicts. The random downpours don’t help. I manage to catch songs/shows by Peter Bjorn and John, St. Lucia, Melanie Martinez, Corinne Bailey Rae, James Bay, The Lumineers, and Deadmau5. Regrettably, due to schedule, the 90-minute evacuation for weather, or desire to have a good viewing vantage, I missed seeing Daya (but I’d heard her earlier this year), Nathaniel Rateliff & The Night Sweats, Kesha, and The Killers. I just couldn’t multipresence well-enough.

The evening performances were delayed when festival organizers made the decision to evacuate the entire park for potential dangerous weather. The day was putting my new water resistant phone through its paces. I leave, linger for a bit, but after a false alarm to re-enter, head toward a bar I’d passed between the park and the station.

Blake’s, a neighborhood straight-friendly gay bar, welcomes the evacuated crowds and the live DJ on a Sunday afternoon is playing hits from all the artists we’re NOT seeing live. Football, soccer, music videos, dancing, and good times are being had by all as we waited for the storm to clear.

I grab a few beers and make my way upstairs waiting for the all clear. And much like an emergency weather alert, those of us with the festival app installed get the notice at the exact same time that gates will reopen soon and that shows will resume at 6 p.m. We make a rush out, finishing our drinks and hiking back to the muddy, rain soaked park.

I manage to rush back and get my spot in the Citi reserved viewing section for James Bay and to hold it for The Lumineers. Normal for me, both James Bay and The Lumineers move me emotionally and I was so happy I had the opportunity to experience their shows and the energy each created.

I ended the night in a dance-party of sorts at the Roxy stage with Deadmau5. The return back to the hotel is uneventful, but I do chat with a local who worked the festival while we waited for the train. He said he’d made thousands of pizzas over the two days for the +90k fans in attendance. Damn.

Because of the shift in schedule due to weather, and the less frequent train schedule, it’ takes me longer to get home tonight. At the hotel, I realize I’m drenched, head to toe and get ready for bed.

Monday is a work-remote day. I do break out from the hotel for lunch at the nearby Peachtree Center where one of Yelp’s top-reviewed restaurants is located. Aviva by Kameel serves incredible Mediterranean dishes.

I hadn’t planned on visiting until this morning, but the line out the door before noon is a good sign. I have no idea what to order in my Veggie Platter (four vegetable sides), and the woman working the line asks, “is this your first time?” in response to my direction to “surprise me.” Boy, does she, plating 8 half-portions and homemade bread of all their selections for the day. The owner and chef is ubiquitous throughout the line offering free samples of the soup of the day and falafel.

Dinner was a meal planned in advance at Ted’s Montana Grill featuring dishes made from bison, specifically gourmet cuts of steak. The staff is wonderful, and I’d highly recommend taking a seat at the bar for dinner, esp. at one of the few seats next to the kitchen’s prep station. It’s worth it, trust me.

My flight out is dumb late but I head to the airport after dinner for one more MARTA ride. I watch a little Monday Night Football at an airport bar before catching my flight which was surprisingly on-time for boarding, departure, and even landed in Orlando early.

Another whirlwind trip filled with adventure, music, amazing food, surprises, and memories. I can’t wait for the next amazing set of travel experiences.

Thank you ATL. I promise it won’t be so long between visits.