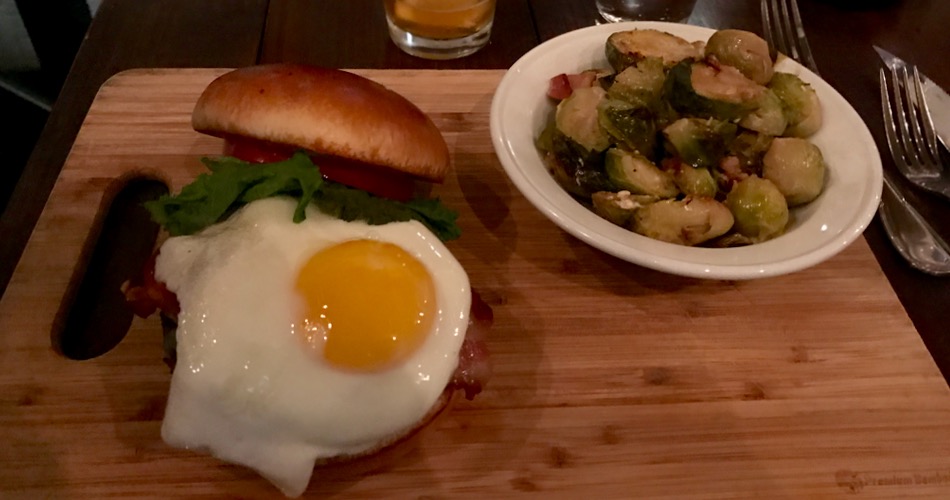 It’s the time of year for countdowns and reviews. With that, an idea I read about on nytimes.com for top restaurants or meals made me think, “What and where were my best meals of the year?”

I often photograph food, especially on Instagram, but never really cull out my favorites. That changes now for 2016 with my top five meals of the year in chronological order; there’s no way I could rank these against one another.

Ice Plant, St. Augustine, Fla. (March)
I ventured to the oldest city in America to join a friend for the first weekend of her family’s spring break. That Saturday night, we trekked into the old part of town to have drinks and dinner at a place both of us had heard AMAZING reviews about, Ice Plant. They don’t take reservations and a waiting list starts early, especially on the weekend.

The farm-to-table, hipster-vibe locale is unique to the scene, “Focused on the art and craft of mixing exceptional local ingredients in precise measurements to create perfect and unique flavor profiles.” Yeah. That!

Where to begin? Well, our wait gave us the opportunity to check out the bar and a signature cocktail or two. The menu changes, but that night I enjoyed their take on a Manhattan before dinner, and a Sazerac during our meal. The Manhattan was served with a hand-chipped then sphered (yep, a verb to make a block of ice into a sphere with weight, steel and pressure) ice cube and was one of the best I’ve ever had. Homemade bitters brought the drink together. For the Sazerac, I don’t usually order, but it was equally fantastic.

The three of us each had something different for our entrees, after two appetizers including their carpaccio. I had the special for the evening, which featured a pan-seared Trigger fish (look it up, it’s crazy local and was caught that same day – the only way I eat seafood) and served with a cheesy polenta. I added a side of roasted Brussel sprouts. It was all incredible. The fish was flaky, flavorful, and perfectly cooked. They were deliciously complemented by my extra side which brought land and sea together. Think of it as an adaptation of shrimp and grits.

Honestly, I can’t remember if we had dessert. I’m sure we did, and it was probably great. I still want another serving of my fish. If you’re in St. Augustine, go! The pricing is what you’d expect at a higher-end restaurant, but for a meal worth remembering, especially if it’s with great company, you should spare no expense.

The Capital Grille, Orlando, Fla. (September)
One of two “chain” restaurants on the list, but both are not chains in the truest sense and that as completely true of our meal at The Capital Grille during Visit Orlando’s Magical Dining month.

Additionally, there’s a week when The Capital Grille’s Generous Pour promotion overlaps with Magical Dining. The result? A three-course meal with unlimited wine for about $60. We took advantage, twice, in one weekend. But it was our second dining experience that was great.

You see, it was the last day of Generous Pour and the wait staff were pretty willing to keep the wine flowing. It’s also when I upgraded the standard NY strip steak (a great cut of meat) to a slightly larger cut finished with a mushroom sauce that was … amazing. It simply melted in my mouth and was enough for a take-home portion for later in the week. I changed up the salad to a healthier option, and changed dessert; my one regret. Stick with the chocolate cake. It’s just better. Period.

We enjoyed several bottles across our table that evening, which turned out to be an almost five hour meal, what with a pre- and post-dinner cocktail. So good. So worth it.

I highly recommend the “chain”, not just because of the two promotions, but because it’s a fantastic meal every time. The staff are simply the best-of-the-best, and I dare you to find a better steak.

(A little disclosure, I do work for Darden Restaurants at present; owner of The Capital Grille restaurant concept, among seven others)

Ted’s Montana Grill, Atlanta, Ga. (September)
A weekend trip for a music festival to Atlanta required a stop at this awesome joint, specifically the one located in downtown Atlanta. As soon as I booked the weekend, I made plans to eat at Ted’s Montana Grill and here’s why.

Let’s start with the fact that you can get bison steaks. Okay, not original nowadays, but when Ted Turner opened this restaurant, and this particular location, it was novel, but not for novelty’s sake. The cuts of meat are amazing, combined with great sides. You must order the half-and-half french fries and onion rings. You won’t be disappointed. Combined with a local ATL beer, you’re sure to have a great meal. I’ve had two, in the exact same location, and while it was six years between visits, I always recommend.

P.S. consider sitting at the diner-style bar. And if you’re feeling even more adventurous, next to the kitchen’s server window/pass-through. I assure you, you won’t regret it. I was offered a sampling of the pulled BBQ bison and signature mashed potatoes as an amuse bouche of sorts. The flavors and textures were fantastic and a great start to my meal.

A Traditional Scottish Breakfast (of sorts), Scotland (October)
The only homemade meal to make the list and for good reason.

This year I ventured across the pond to the isle of Scotland to hang out with and to visit two friends. I had taken the overnight flight direct from Orlando to Glasgow and they graciously picked me up at 5:45 a.m. local time. As we returned back to their home – a more than a 20 minute drive away – we chatted about our plans for the day, which started with their version of a traditional Scottish breakfast.

Okay, it wasn’t as traditional as you may think. Essentially, it was an assortment of grilled meats; lots of grilled meat. We had bacon, two types of sausage, haggis (yup) and black pudding. I tried it all, with buttered bread and coffee. It was good, grilled bits of fat and meat. What more could three chaps want?

What made the meal memorable, beyond the traditional Scottish fare of black pudding and haggis, was the camaraderie and fellowship. I hadn’t seen the gents in about a year and we had much on which to catch up. It would also turn out to be the only day all three of us would spend together in the near two weeks I visited. It was the perfect way to start a new adventure with old friends.

NOVA, Orlando, Fla. (December)
When the best laid plans change, it can sometimes be for the best. Several of us from work planned a dinner at a Downtown Orlando restaurant, but on the day of, found out it was closed to the public for a private function. Now what?

A quick look around on OpenTable resulted in a change in train stops and a reservation at NOVA near Lake Ivanhoe. The weather was nice enough for our four-top to take a seat outside. Our waiter was great and full of recommendations for this farm-to-table, local eatery. Prices were a bit high, but well worth the quality received. That tag, “Taste the difference at NOVA,” is true.

We started with appetizers of fried green tomatoes and fried calamari. Wow! Simply the best calamari I’d ever eaten with a perfect crispy battering and excellent chili sauce to complement. I had a local beer from Crooked Can brewery (Cloud Chaser) and two in our party split a pinot noir from Oregon. Both matched our meals perfectly.

The four of us had three different entrees, including the pork chop, cooked to taste, and ahi tuna. I had what I’d call a “breakfast” burger with a fried egg, bacon and cheese on a brioche roll, with a side of pan seared Brussel sprouts. They call it the 1409 Burger and it’s by and large one of the best burgers I’ve ever had. The sunny side up egg was just the right texture. It was a messy, delicious meal. The three cheese mac & cheese lasagna served with the pork chops I heard was very good. My friend who ordered the tuna couldn’t stop raving about it while she ate it in sheer ecstasy (her words).

We did order dessert of fig crème brulee for the table. It was okay, but on second thought, we should have taken the red velvet cake that was brought to us initially in error.

All in all, it was a great meal with good company and fantastic, locally sourced food and drink. If you’re in the City Beautiful, consider adding to your non-theme park itinerary.

The year has had it’s ups and downs, and food has been one of the ups. Here’s to continued good eats in 2017!