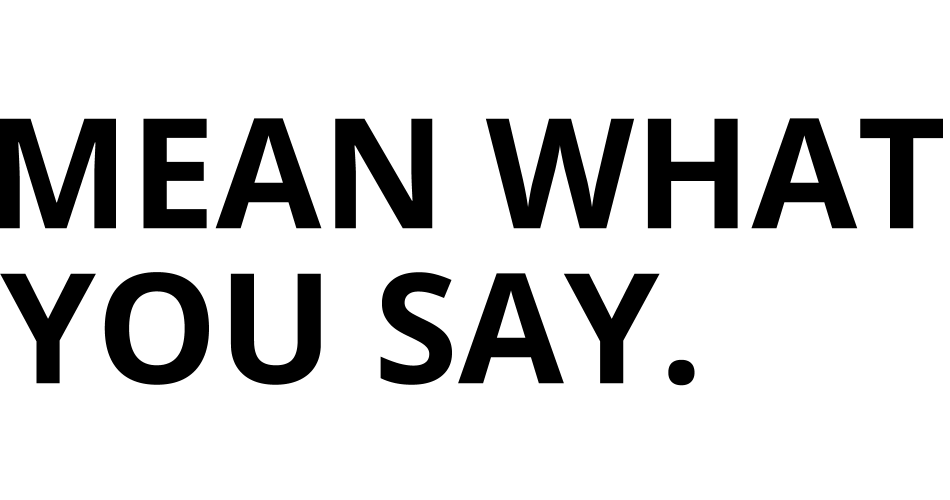 MEAN WHAT YOU SAY.

Immediately following, “Say What You Feel,” comes, “Mean What You Say.”

I doubt it’s coincidence that they are in this order as I’ve often heard, “Say was you mean, mean what you say.” The idea being counterpointed against itself.

First, truth telling shouldn’t be a luxury. A person’s character, their value in society, is largely driven by how truthful they are in what they say AND do. In that sense, if you say you’re going to do a specific item or action, your value and trustworthiness is driven by completing said action.

Second, obfuscation helps no one. Allusion to an act, fact or detail is just another form of fibbing, lying, or bearing false witness. If the words that you’re about to share aren’t truthful, meaningful, then don’t share them as they add nothing positive or constructive.

That is to say, your words shouldn’t be cruel or hurtful. Honesty, while the best policy, may best be served in silence. Your words can mean the most when they aren’t said, and therefore kept to yourself. You don’t like your friend’s new hairstyle. Unless prompted for a specific review, it’s best to mean what you say, which could be as simple as, “you do you!”

When did you not mean what you said? What was the outcome? Have you since been more chioceful in your words, when you share them, or to whom you share them with?

Read all the articles about the Journal.

Journal, Journaling, Mean What You Say,